One of My Designs

I'm always thinking about creating. My future starts when I wake up every morning. Every day I find something creative to do with my life.

At last I got something finished.  It's finally a top with borders attached!  Of course it still isn't quilted.  I'll just add it to the que of dozens waiting for that attention.  Obviously my creative strength lies in the design and creation department not the finishing one.  I must have been thinking about something new when they were passing that one out.

Want to see?  I have thought about writing this one up as a pattern.  Let me know what you think.  It is not a complicated one at all.  I just got hung up on getting the borders on. 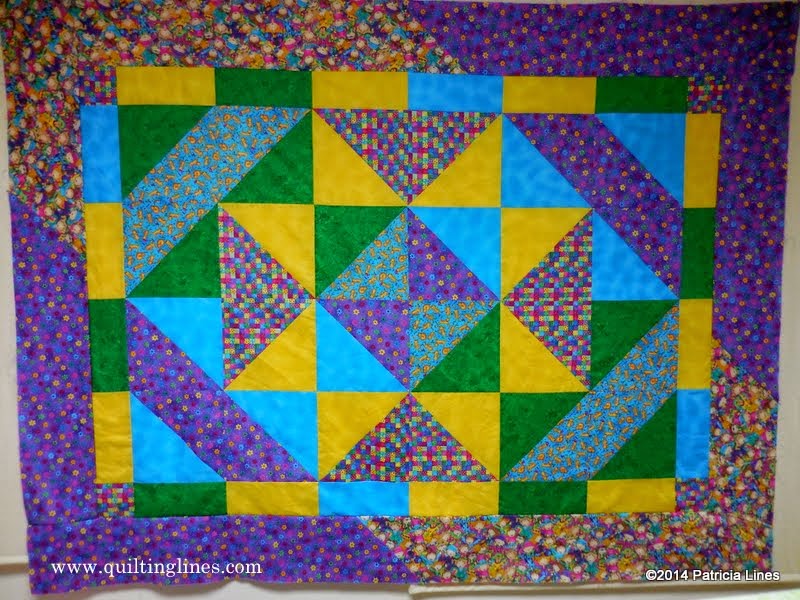 The triangles started out at 10 inches so the top is a large lap size.  I need to measure it. 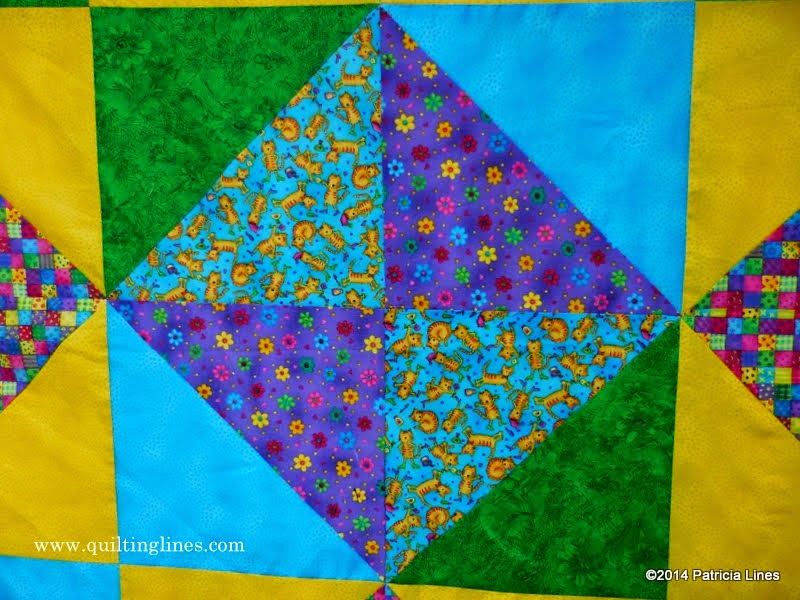 The colors didn't photograph very true.  The blue is a bright turquoise and the purple nice and rich.  This is the center.  The colors are better in the next two pictures. 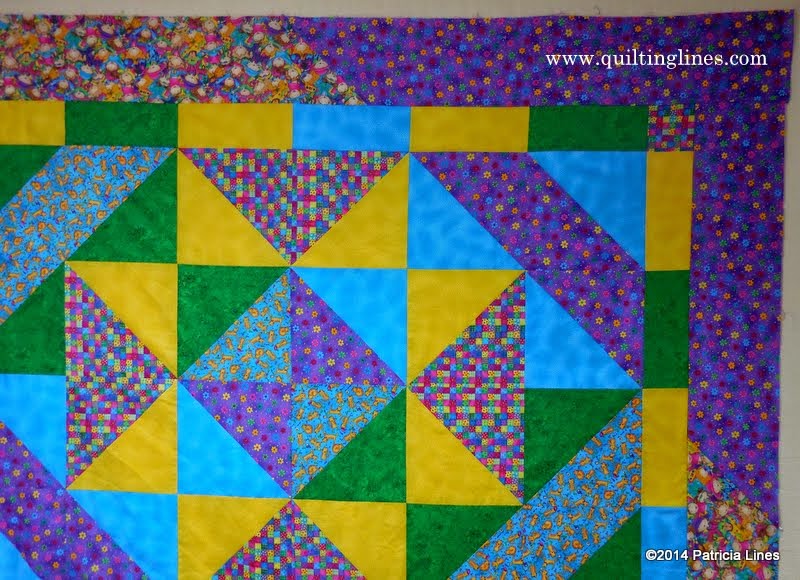 What I was trying to do with the borders was to give it a 3 dimensional look like the purple was floating beneath the rest of the quilt.  I think is was moderately successful. 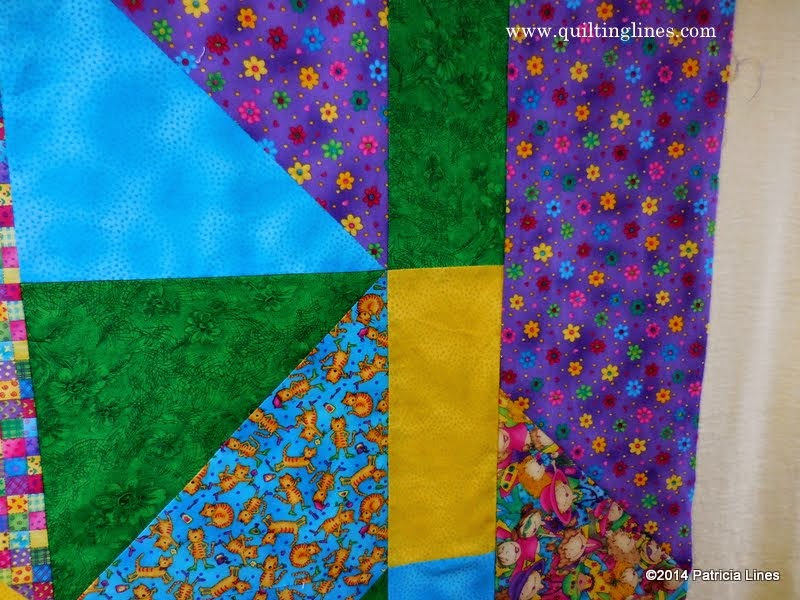 This close up above show how the angle is continued in the outer border.  This would look better done with different fabrics but I made the design decisions after sewing the center of the top together.  This was designed on the wall working with the squares already sewn.  I usually make up new designs in EQ7 and then go to the fabrics. 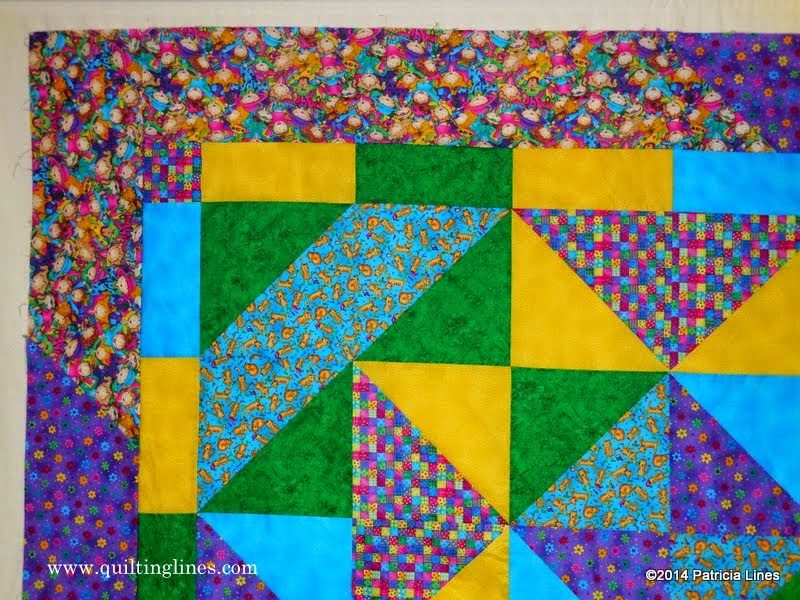 I don't work with novelty prints too often but I have whole bolts of these.  The tone on tones I only had what is in the quilt of the blue and yellow.  I think I have a bit more green.  I will use the small patchwork print for binding.

Now for just something pretty.  Back in the Spring I bought 4 dahlias and this is the first one to bloom.  It now has another bloom open.  These were supposed to get about 3 or 4 feet tall.  It is about 2 feet tall and the others are shorter than that.  One other one has a bud.  Hopefully we will see a few more flowers before frost.  Maybe they will be bigger and bloom earlier next year.  This bloom isn't as big as my hand.  My Mother had some that were 6 or 7 feet tall and had blooms the size of a plate.

We also planted a peony bush that also hasn't done anything but it isn't dead yet.  Our hard red clay is tough on plants. 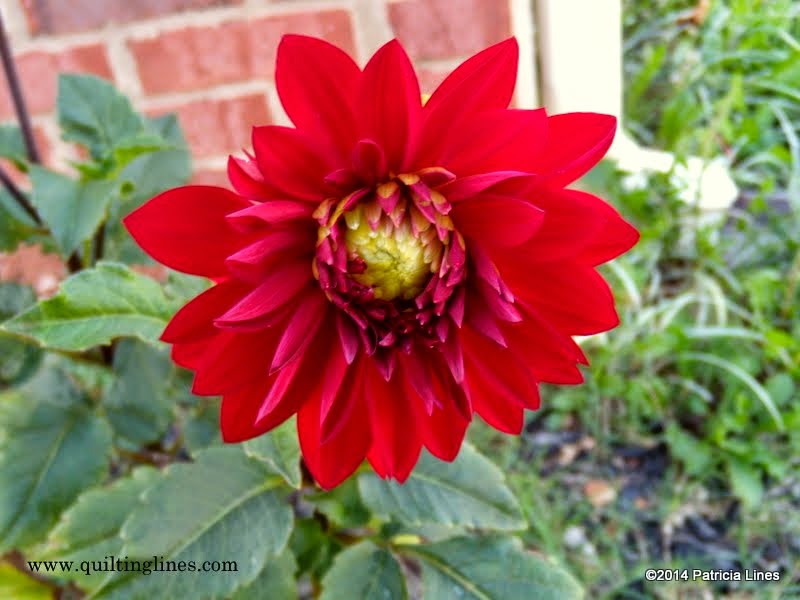 So that's my big reveal for the day.  I also have the rows together on the Soul Searching quilt but I need to cut and sew the Black & White Prints I'm going to add for a horizontal sashing.  I didn't get it done today because I took a nice nap.

So let me know what you think of the top.  I can't wait to read your comments.  I also need a name for this one.  Any suggestions?

Linking with:  Design Wall Monday and Anything Goes Mondays and
Linky Tuesday  and Fabric Tuesday

We live in a web of ideas, a fabric of our own making.

Ahhh!!!  New fabric!  The smell, the touch of it, the ideas and possibilities it ignites within our soul.  Is there anything like a little retail therapy to a quilter or sewist?  If you can't make it out to a store even petting the stash will get your brain firing with more ideas than you can find time for.  But then if I didn't dream up new things to keep me going I would be very, very sad and bored.

So I went to this show for a day.  I usually go for several days but not this time.  There were some really wonderful quilts there and enough vendors to significantly lighten my bank account.  I think it would have been a better show if they had accepted entries of quilts for judging and prizes.  The ones there were wonderful but I like to see what regular non-published quilters make too. 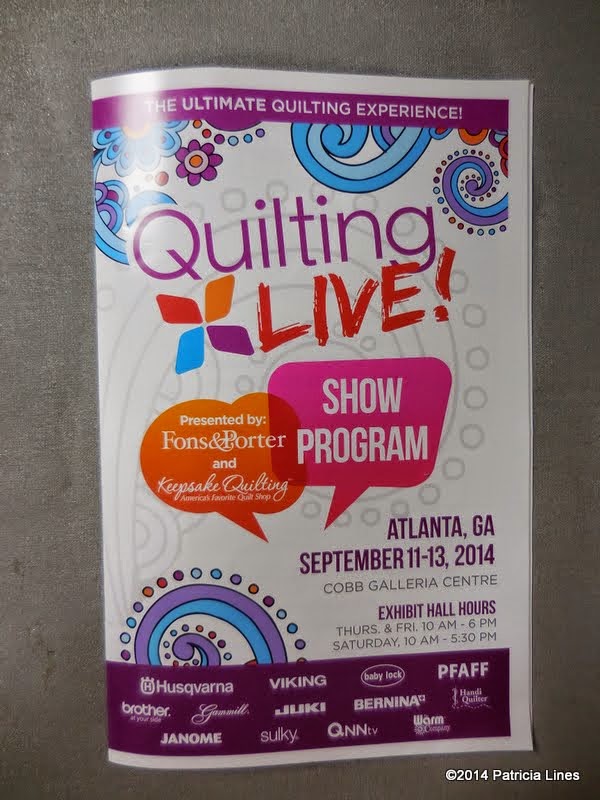 So what did I find to buy?  Many things but not some of the things I had on my list.  This little hedgehog potholder pattern was just too cute to pass up. 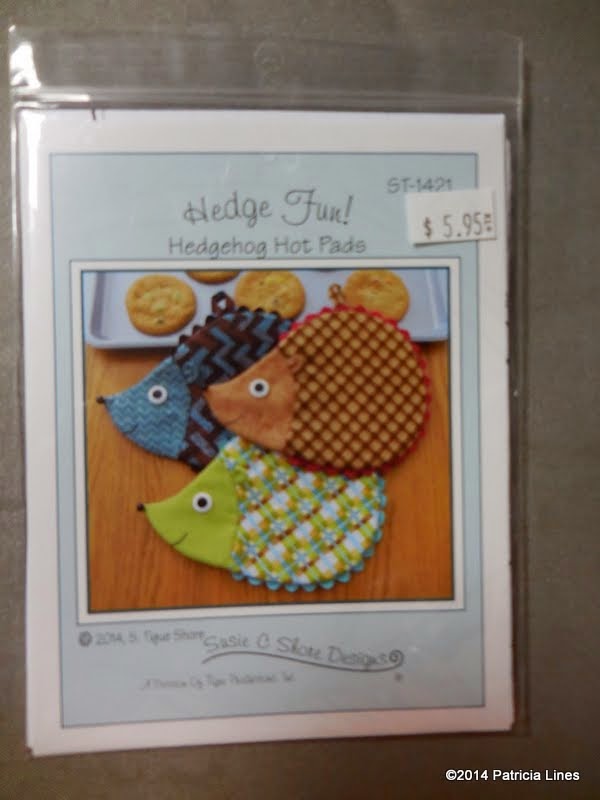 This Sew Together Bag has been featured on many blogs this year.  I think I might like to try my hand a one or two of them.  I have a huge stash of zippers that I should put to use. 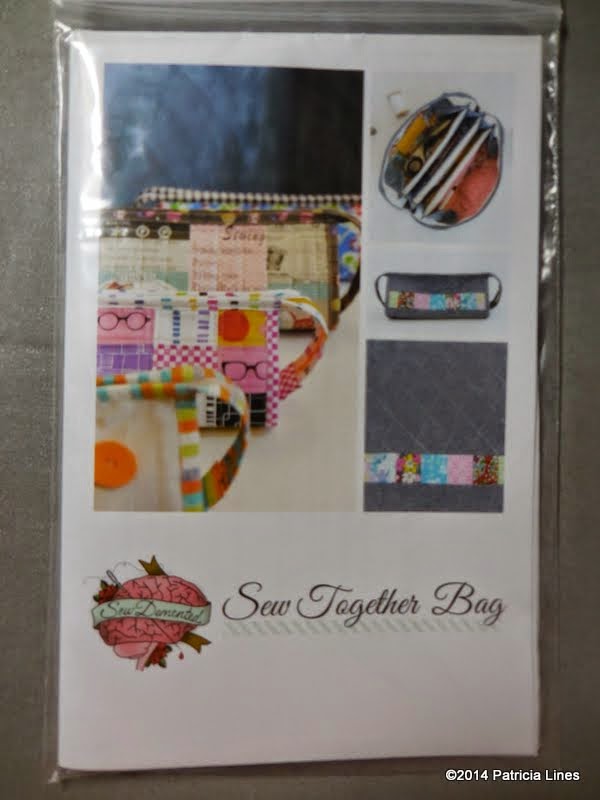 I haven't made my granddaughter anything to wear.  These two patterns look like they would fit her style. 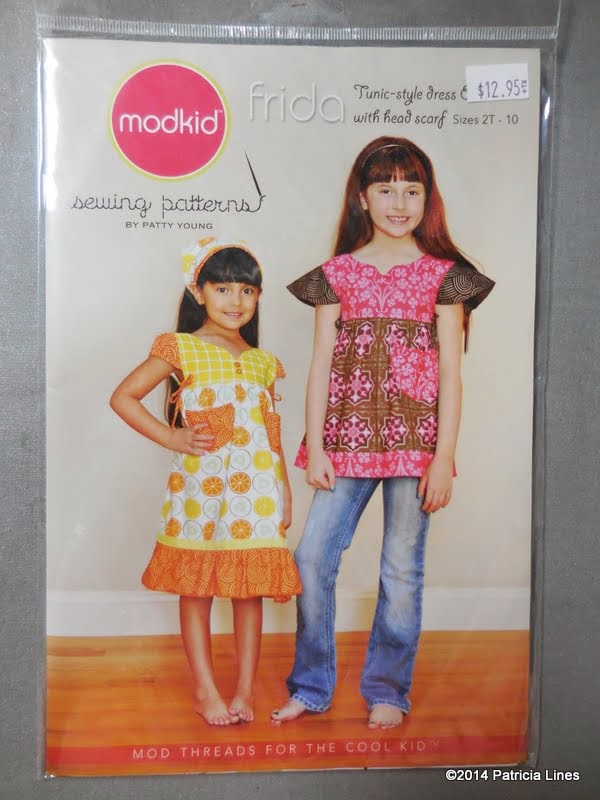 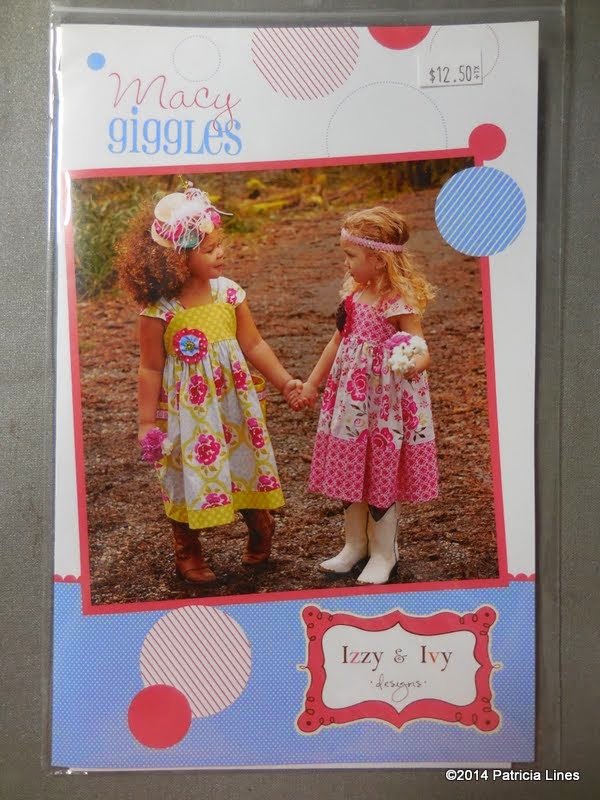 This bag pattern includes three different bags.  It called to me for some reason. 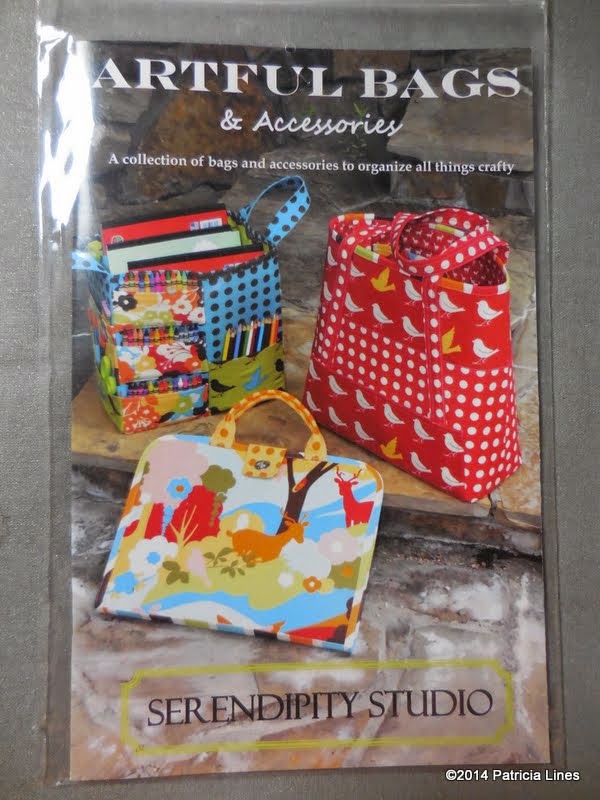 If you have been reading my blog for very long you know I have a thing for owls.  The fabrics on the bottom are a heavy linen/cotton blend that will be just right for a bag.  The top one is a cool Alexander Henry print that I think would be great for the lining. 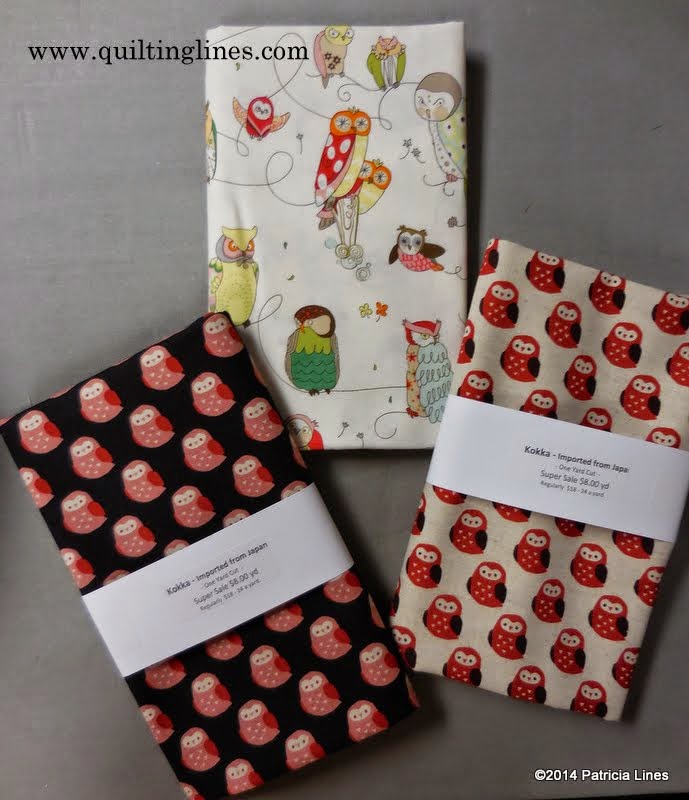 This collection of prints really appealed to me!  It's full of art supplies and quotes.  Maybe it will end up as the art supply tote. 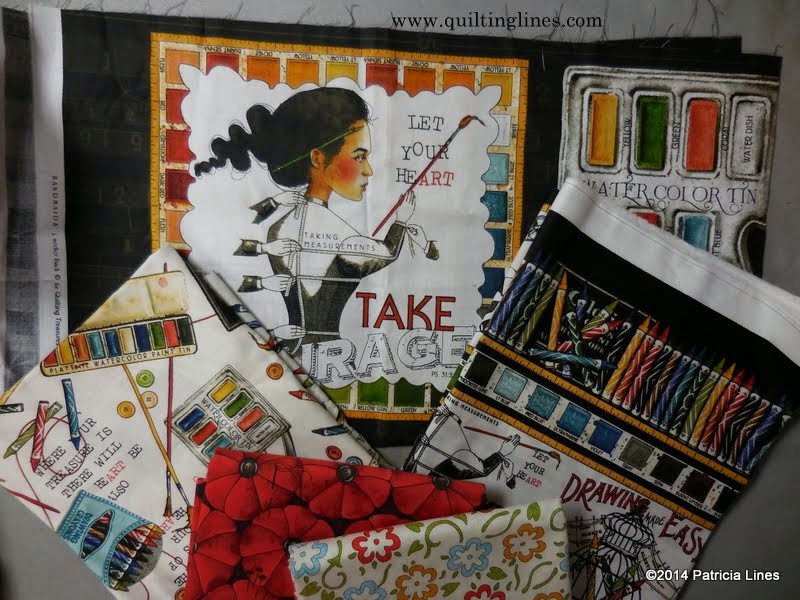 Then there were these that jumped into my had just because... 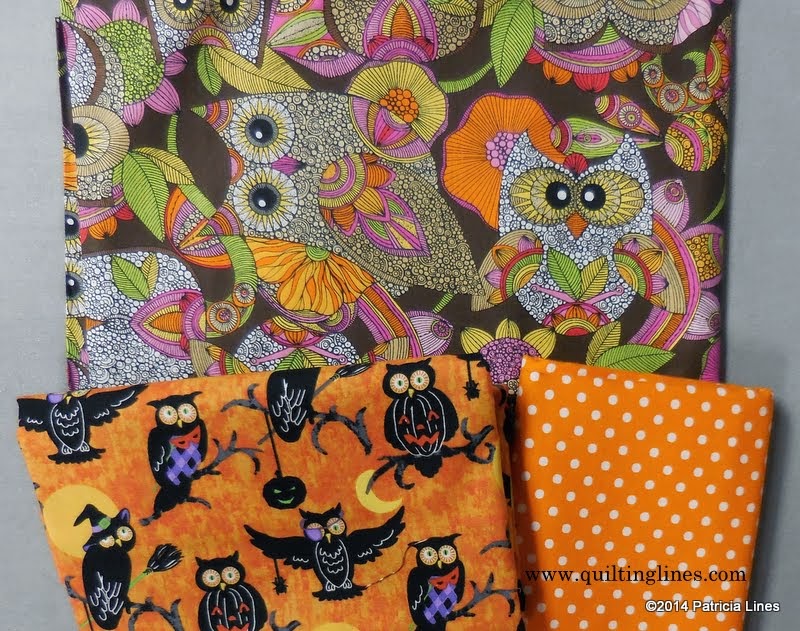 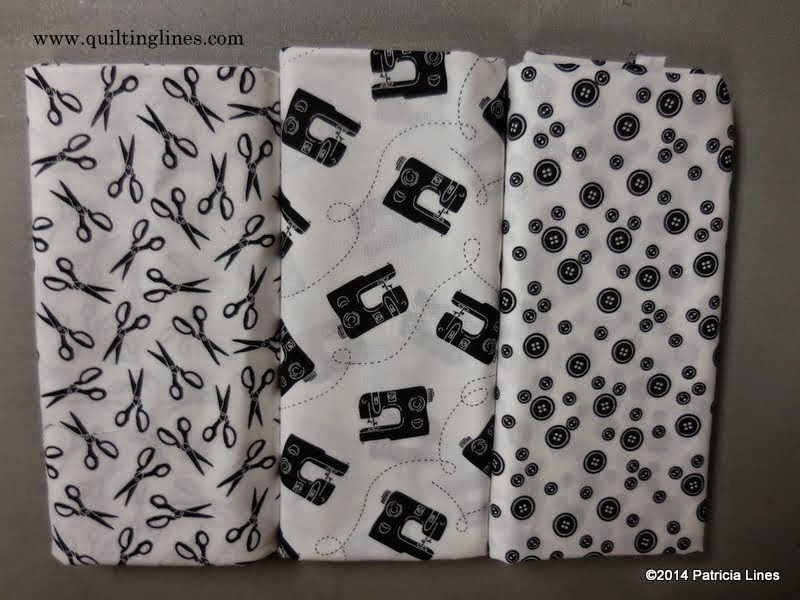 I'm sure you can see the appeal!  These are all one yard cuts and they got very heavy to tote around the show.  I also picked up a few kits and baubles for making jewelry on my Kumihimo loom.  Can you believe there aren't any batiks?  I will have to remedy that oversight in the near future or maybe I already have.

I should get off the computer and into the studio.  I have things to get done there and more projects to plan.

Linking with:  Freemotion by the River
Posted by Patricia at 1:38 PM 3 comments:

America is not like a blanket: one piece of unbroken cloth, the same color, the same texture, the same size. America is more like a quilt: many patches, many pieces, many colors, many sizes, all woven and held together by a common thread.

Want to see more green?  I should have shared these back in August but as I said in my last post I was distracted by other things happening in my life.  So here are some of my green blocks. 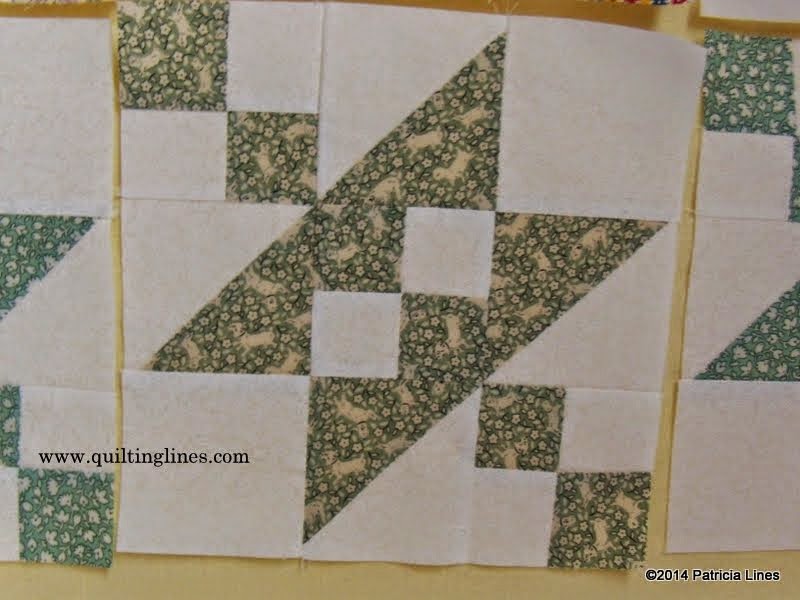 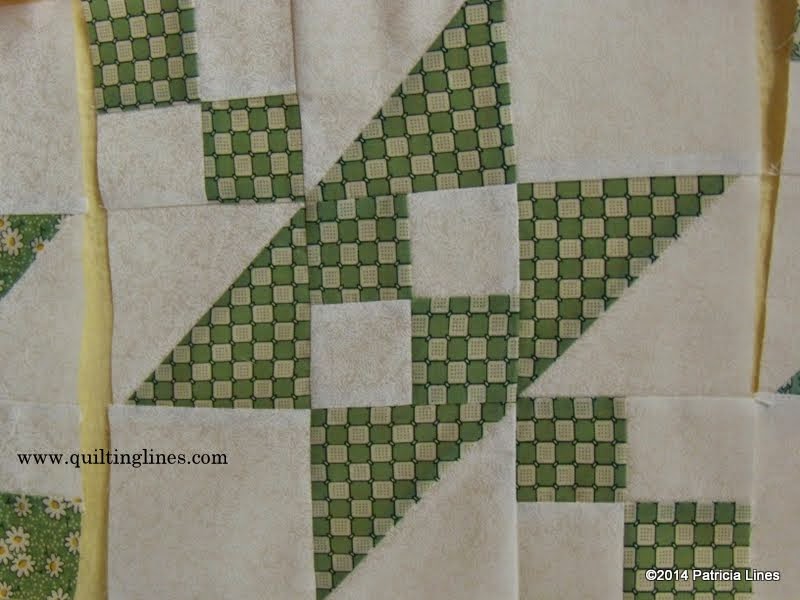 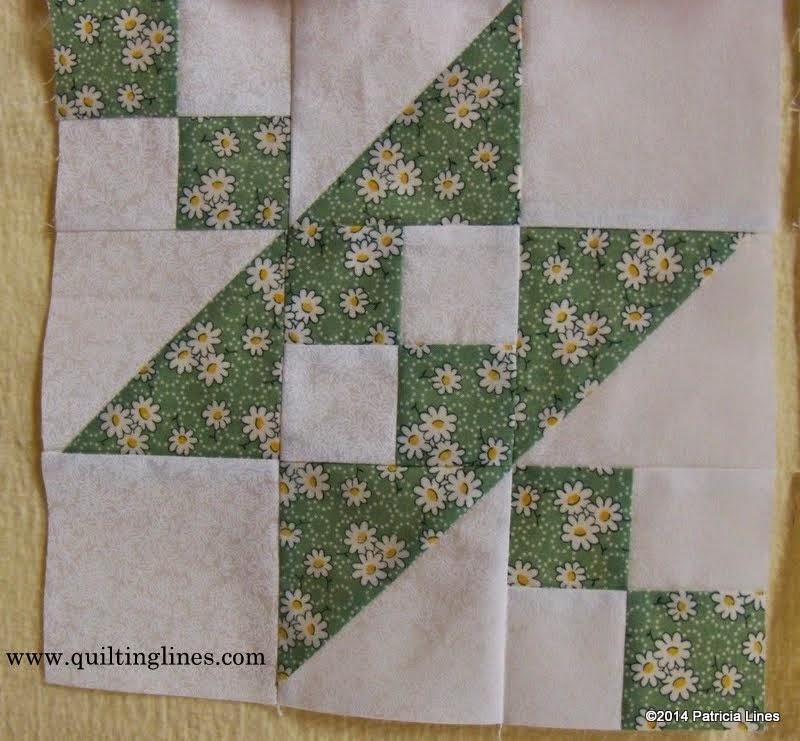 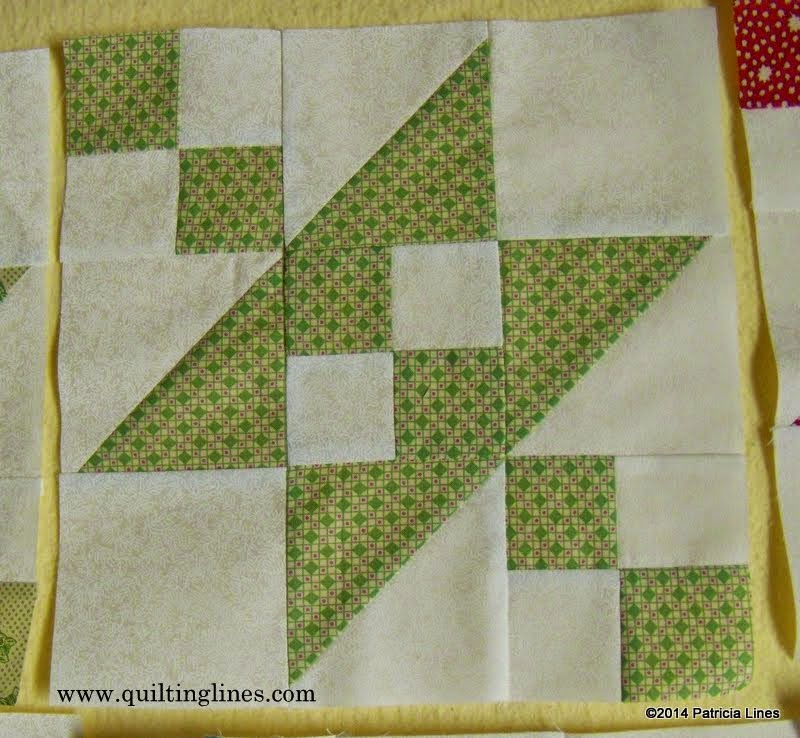 I can't say that 30s prints are my favorites but they do make me smile!  I have learned over all the years of quilting that I have under my belt that with blocks that have directional triangles that it is best to chain piece the blocks together after the smaller units are done.  If you do this the chances of getting the triangles turned wrong are much smaller.

Here is what I do: 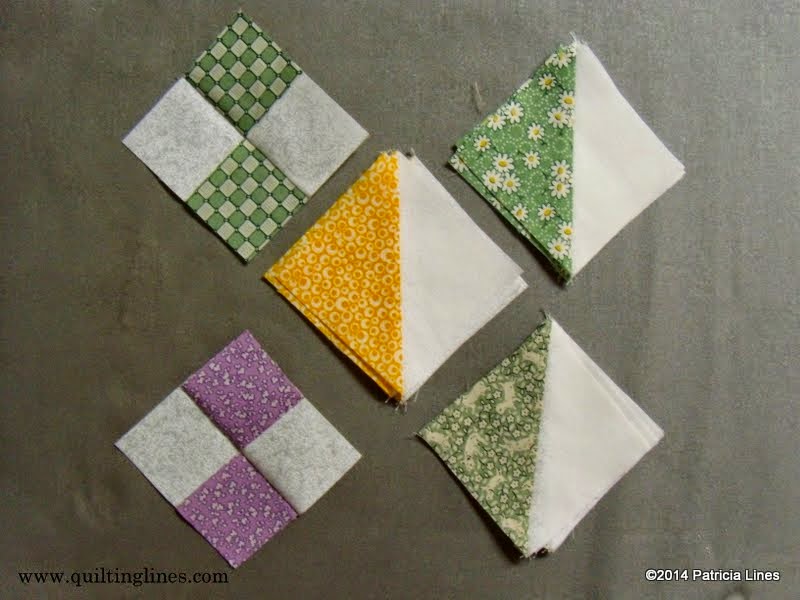 First make all the smaller units 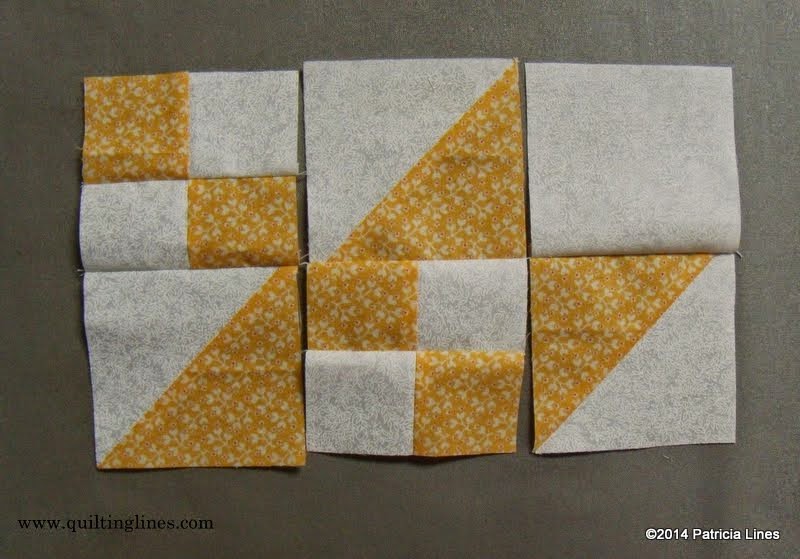 Next sew the first two units in each row of the block together.
If you look closely you can see the threads connecting the block rows.
(They would have gone through the machine sideways to what is pictured.) 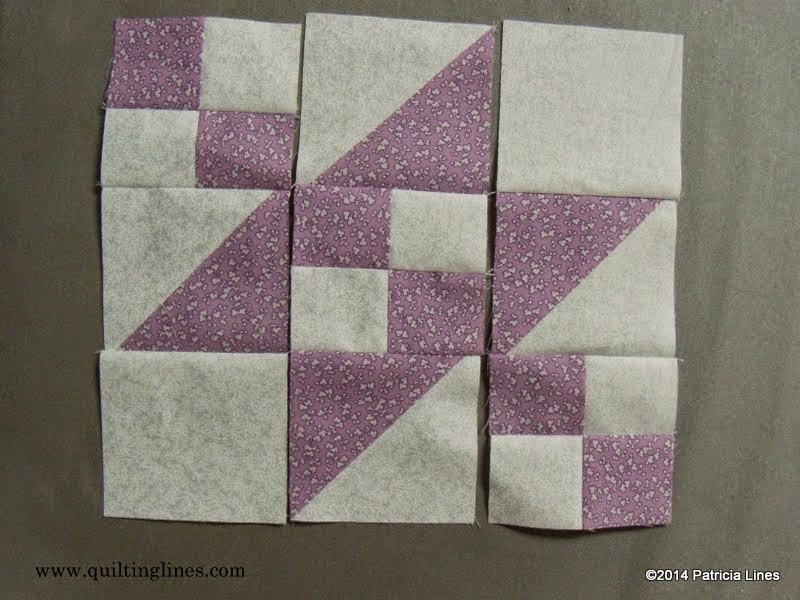 Next add the last row still leaving the threads uncut.  The last thing to do is to sew the last two seams going across the block.  I made 48 blocks for this quilt and only twice did any of the triangles get turned in the wrong direction. I don't think any of the 4 patches did.   I usually work on a group of about 6 blocks at a time chaining through the same step on each of them.  When I work is small groups of blocks I always get a few finished blocks done even when I don't have a lot of time at the machine.  Nothing like a little immediate gratification!

Of course not all blocks are nine patches.  This method can be used no matter how many rows or pieces are needed.  I also use the same method for joining blocks into rows to complete the quilt top.

I hope this simple tip will save you some time and keep you from having to pick out things that get turned the wrong way.  If you have any hints that save you time leave them in the comments below.

Linking with: Anything Goes Mondays
Posted by Patricia at 11:53 AM 4 comments:

The dignity of the artist lies in his duty of keeping awake the sense of wonder in the world. In this long vigil he often has to vary his methods of stimulation; but in this long vigil he is also himself striving against a continual tendency to sleep.

I didn't mean to be gone for so many weeks!  August was a bit crazy with day trips and the need to run hither and hon for various appointments.  My dear sweet doggie has been plagued with various allergies that made her restless and kept us awake for many nights.
She is now getting better after several trips to the vet and we are getting a little more sleep.

September started off nice with some of my kids coming over for a while Labor Day.  The rest of the week didn't go so well.  I had an unexpected trip to the ER with a kidney stone.  Fortunately it was gone in about 48 hours but it took a few more days to get the drugs out of my system.  Can't say that I enjoyed that experience at all.  Pain that intense isn't fun at all!!!  Needless to say I didn't get much done for a few days.

Happily I'm back to normal again!  I have made progress on a few things.  Want to see? 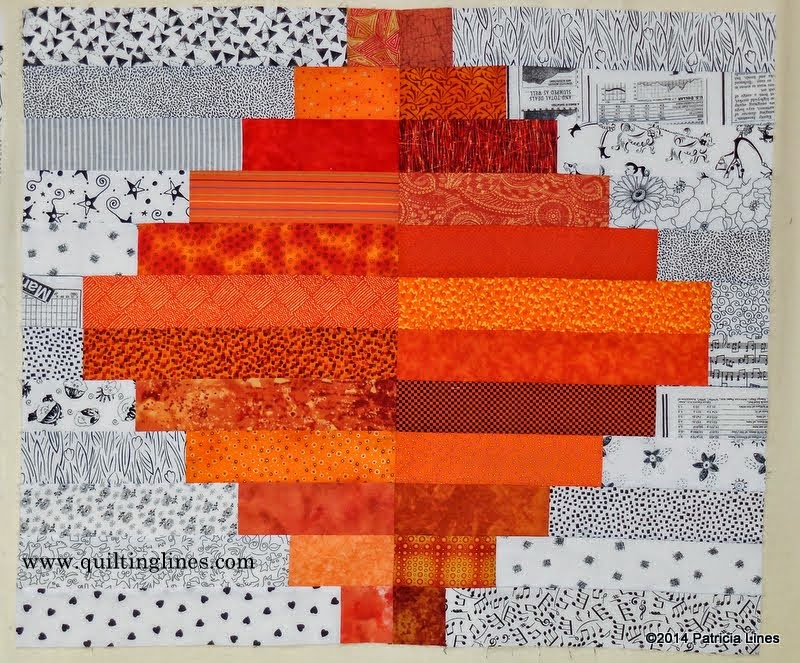 I made my last two Soul Searching blocks.  I had skipped August because I wasn't sure I wanted another green.  I love the orange one!  Then after thinking about it for weeks I decided that I would make a dark green one. 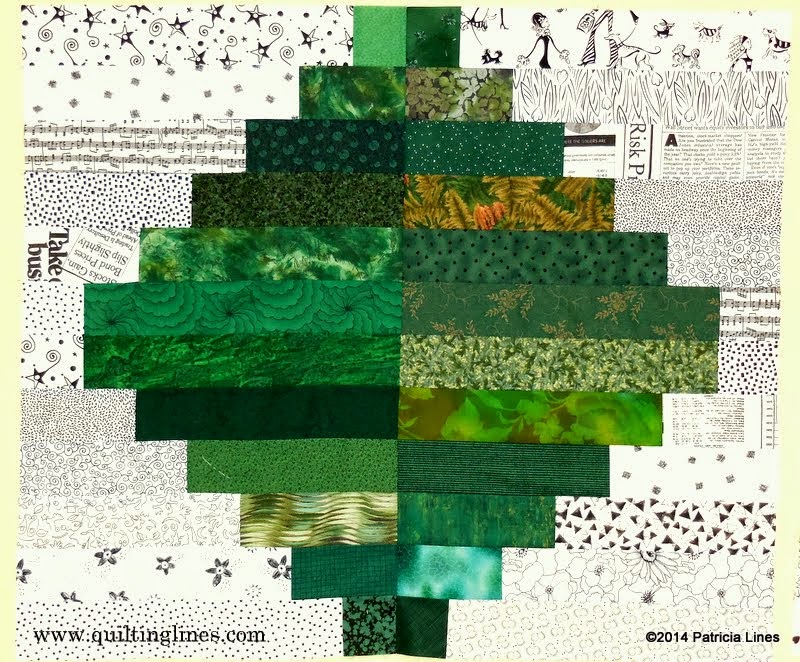 So what do you think?  Now I have nine made and can sew them all together.

Back in August I also made some more 30s blocks in green.  Don't seem to have those pictures loaded from the camera yet so I'll share those later.

I went to the Quilting Live Show last week.  I had wanted to go to Chattanooga to the
AQS show but after feeling poorly for a week I decided not to push it by being on the road alone.  I think that was the right decision.  We also had to cancel a weekend in the mountains because of my wonderful little kidney stone.  Who knew that something the size of a split pea could cause so much trouble?

I managed to console myself at the Show with some shopping.  I'll share pictures of some of the goodies I bought next time.

I've been making progress on a few other things too that I'll be sharing soon.  I've actually been getting some borders sewn on to projects!  This is a good thing!  I would hate to show you how many tops I have that are all done except for the borders.  I hope to get two that were design issues done this weekend.  Maybe I'll get the nine Soul Searching blocks on the design wall too!

Linking with: So Scrappy and Patchwork Times
Posted by Patricia at 2:02 PM 14 comments: