The person who makes a success of living is the one who sees his goal steadily and aims for it unswervingly.

I finally got back to the longarm and finished the charity quilt I had started.  Where did June go anyway?
Oh yeah, three trips...  now maybe I can get another quilt loaded this week.
Here's a picture of the quilt.  I did not make it, I just quilted it for the charity group I'm going to.  Someone else will finish the binding after I get it stitched on.  I used it for some Free Motion practice.  It turned out OK I guess, not wonderful but not awful either. 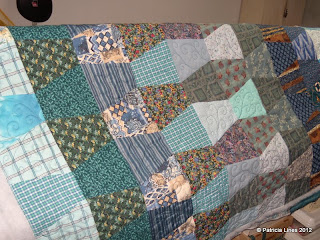 Some of the designs turned out pretty good.  The thread matched the darker prints so well that I had a hard time seeing where I had stitched which can be a problem. 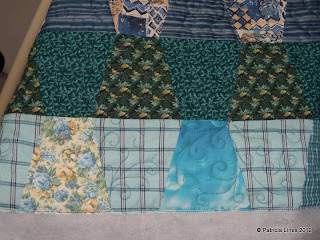 I think I'll do swirls again but perhaps as an all over vine instead of off a stem like these were. I'm linking to Amy's creative side: One-thing-one-week-challenge since I got One Thing Done! 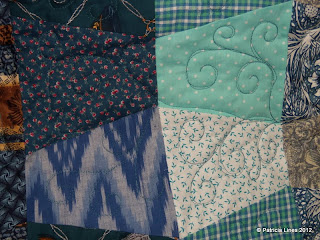 On the design wall there are some more triangle blocks.  It's growing and now I have it laid out the way the pattern showed not like I had it last week's post.  The blocks will be moved around a lot before it's together.  I was surprised at how much pink/mauve turned up in them.  Still have more cut out and will probably cut out some more.  So for I've just used the strip bins, fabric samples and a few scraps. 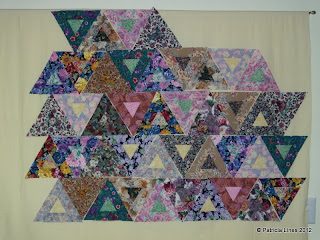 I have the border triangles for the Carpenter's Star together too.  Now to just get the borders on. 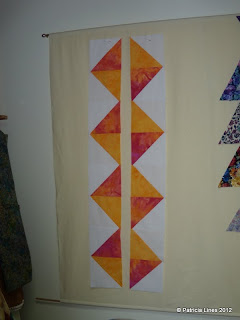 I'm linking to Judy's Design Wall Monday check out what everyone else has up on their wall.
Posted by Patricia at 9:24 PM

Email ThisBlogThis!Share to TwitterShare to FacebookShare to Pinterest
Labels: Design Wall, One Thing