Mistakes are merely steps up the ladder.

I realized that I haven't posted many pictures of my own quilts.  I worked hard for a while taking pictures of as many of them as I could back in the Fall but didn't share all of them.  Since then I have moved to other subjects but I thought I would make an effort to share them one at a time along with a little of the story of how they were made and what I may have learned along the way.


I won these blocks at my quilt guild back in the mid-90s.  As with most blocks made by a group of people they varied in size and fabric content.  I selected the ones that fit together the best in color and size and made the top.  I seem to recall redoing a few seams in a few of them to get the sizes more consistent.

I went out on a limb and used contrasting thread for the stippling.  I had practiced several days while I had jury duty.  Each juror was given a small legal pad and a pencil.  It was a very boring experience as the defendant was late and there was a lot of waiting around with nothing to do and so I doodled stippling. ;-) 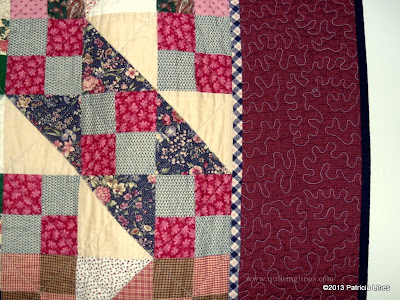 If you compare the density of the quilting in the border here to the left and the one below you can see that this one is more loosely quilted.

The one below is more densly quilted.  There is a reason for this and a lesson that was learned.

I had pieced the border into a long strip carefully matching the tiny plaid.  I then cut the needed length from the strip for the top and bottom and one side and added them. 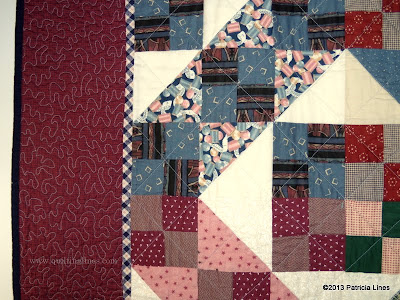 I was working on it in my shop and had to stop frequently to help customers.  I was also working with a deadline of a quilt show that I wished to enter it in.  At any rate for some reason I didn't measure and cut the last border to fit but instead just sewed it on.  When I was done with it I saw that there was extra fullness in it but I didn't have time to change it at that point.  The solution was to put more quilting in along that border and to work in the fullness as I came to it.  After it was finished the difference was hard to see since it was on opposite sides of the quilt. 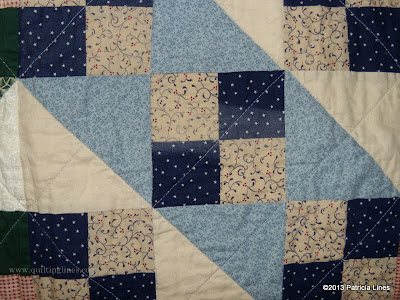 The other thing I learned recently from this quilt is pictured above.  While I had so many quilts laid out for taking photographs I had them draped over a chair in front of a window.  The afternoon sun found it and as you can see the fold that was exposed faded.  Other quilts in the stack were not affected.  You can never tell which fabrics will be light sensitive.  I think the newer ones are more dye stable than the older ones but it's always a possibility.

This quilt was also the first of my quilts to have 'Back Art'.  When I was pressing the fabric that I had selected for the backing I found several small holes in it.  Since I still had more of the blocks I hand appliqued them over the holes.  You can see that the colors of these did not go very well with the ones used on the front. 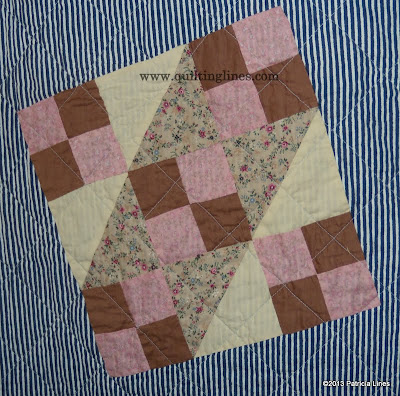 I also added the folded flat piping at the border line.  I cut the plaid on the bias and it seemed to add just the right touch to accent the quilt.  All the fabrics were from my stash and it did hang in the quilt show.  Not a prize winner though. 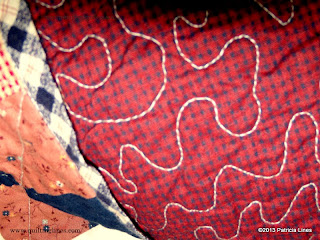 Things I've learned from this quilt:
This quilt has been used and loved.  My children used to sneak it from each other to use in their room.  Now they have moved out and on with their lives but I still have it and my memories of them using it.

What have you learned from your quilts?