I have good news!  Spring is coming to the South.  Yesterday and today the temperatures are in the 70s.  Of course tomorrow is to be colder and rainy but the long harsh winter seems to be coming to an end at last.  You may cheer now! 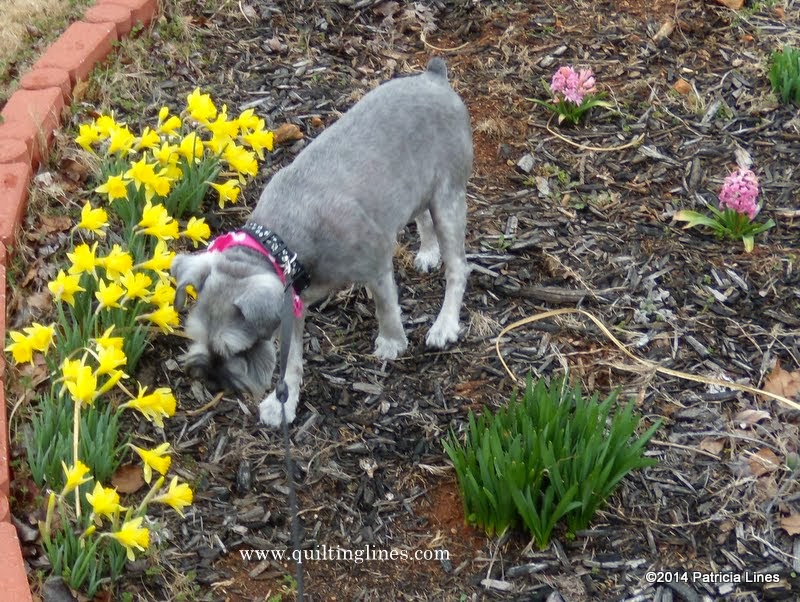 Misty even seems to enjoy the daffodils. 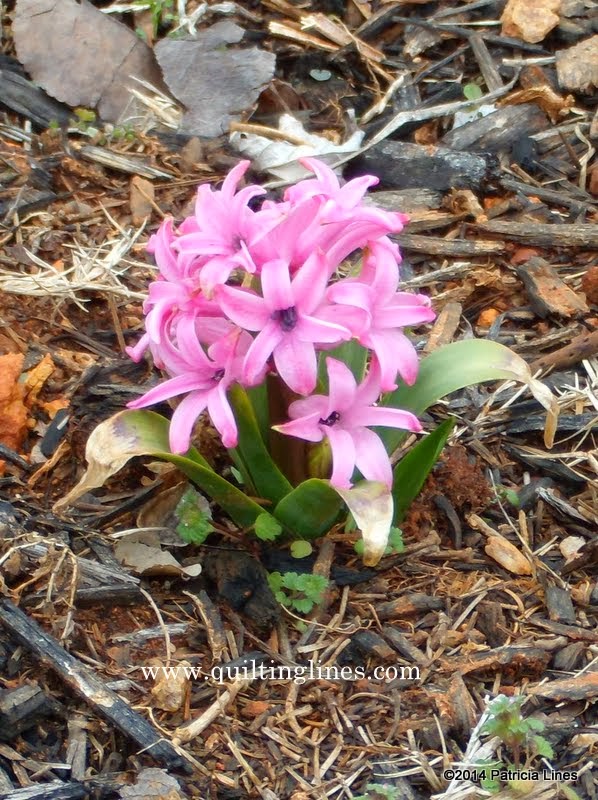 It's nice to see the hyacinths that David planted after they quit blooming last year did make it through the winter and bloom.  The tops of two of them were a little frost bit and they are a little small but that's OK.  You can see how they looked when I bought them last year here.
Definitely not as showy this year.

I know I haven't been blogging a lot lately but I have been on a cutting and sewing jag.  My head is filled with projects that I want to get made.  Of course a good shrink might have a few words to say about why I have been in the mood to attack fabric with my rotary cutter and chop it into bits.  LOL  I also have made a dent in the bin of fabric waiting to be ironed and put away.  Still working on that last step though. 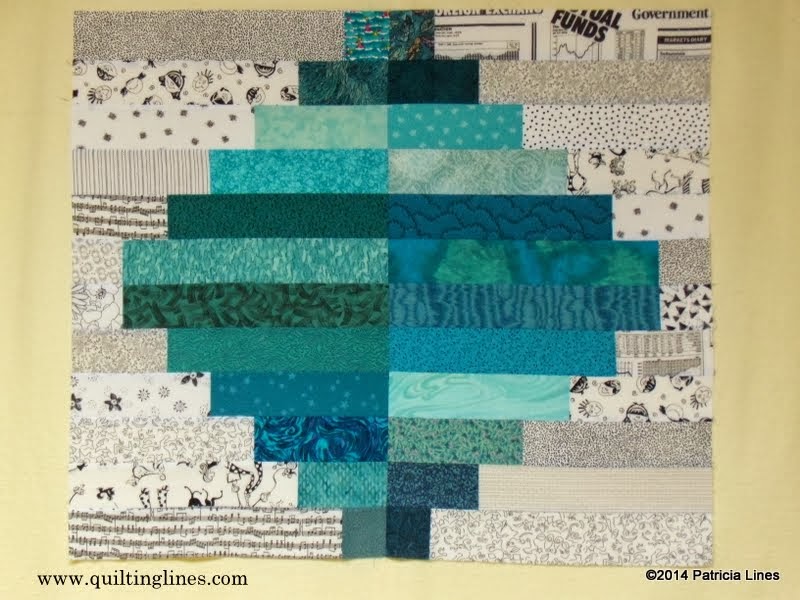 I did get the aqua/teal Soul Searching block made for the Rainbow Scrap Challenge.  Since purples and teal were my favorite colors for a number of years during the 80s and 90s I had a few to pull from.  I'm hoping purple and yellow will come up soon. 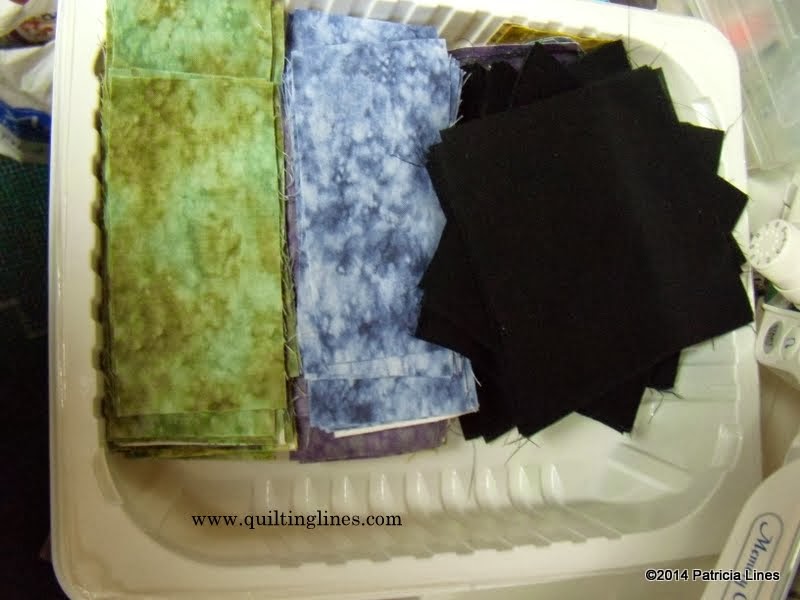 I got the 5 inch black squares cut on the Accuquilt studio too.  This project is now ready to go.  I put it aside for another one that was just screaming for my attention though.  It is going so fast that I should have the whole top done today if I can get back into the studio.  I'll let you keep guessing as to what it may be.

And are you ready for?  Can you believe it?  I have not one but TWO finished tops!!! I told you I had been busy.  The border issues were resolved and now the question is which one to finish first so I will let you help with the decision. 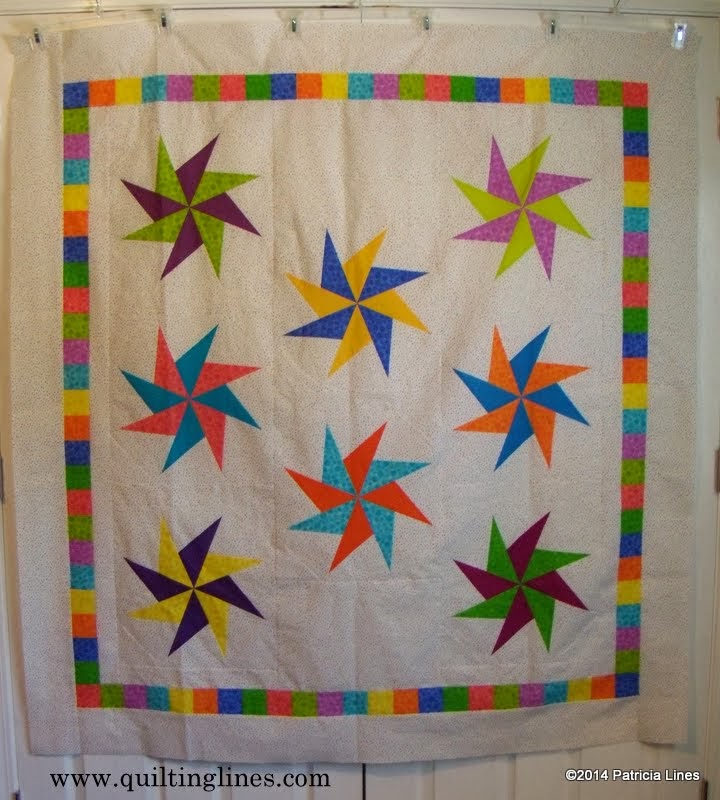 This was the original plan.  Star blocks are just two colors, a dotted print and a solid.  Two blocks of each colorway.  The border issue HERE, was resolved by eliminating the solids. It took a while to make up my mind about it though.  Take a closer look at the blocks. 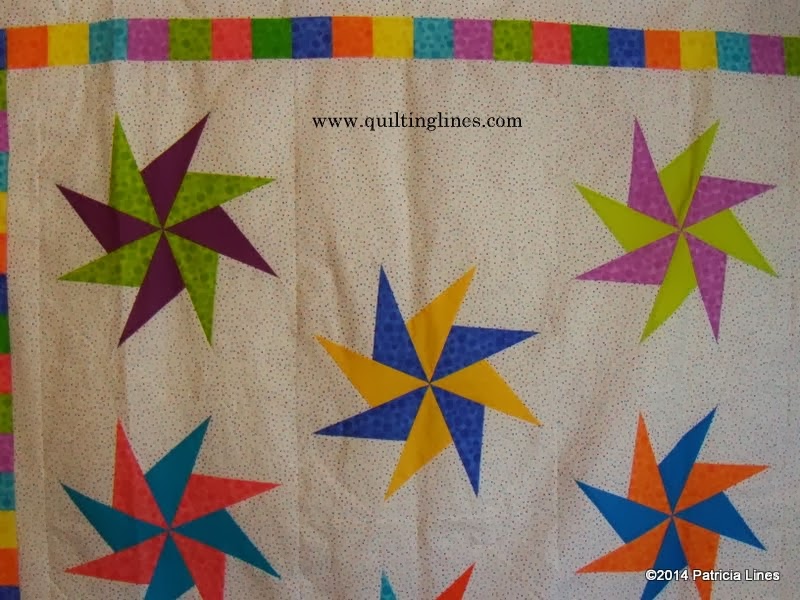 When I started this project back in June I realized I had enough strip sets for two sets of blocks since I was using so many colors.  As I was working on it the extra blocks just kept nagging me for attention so they got made too. 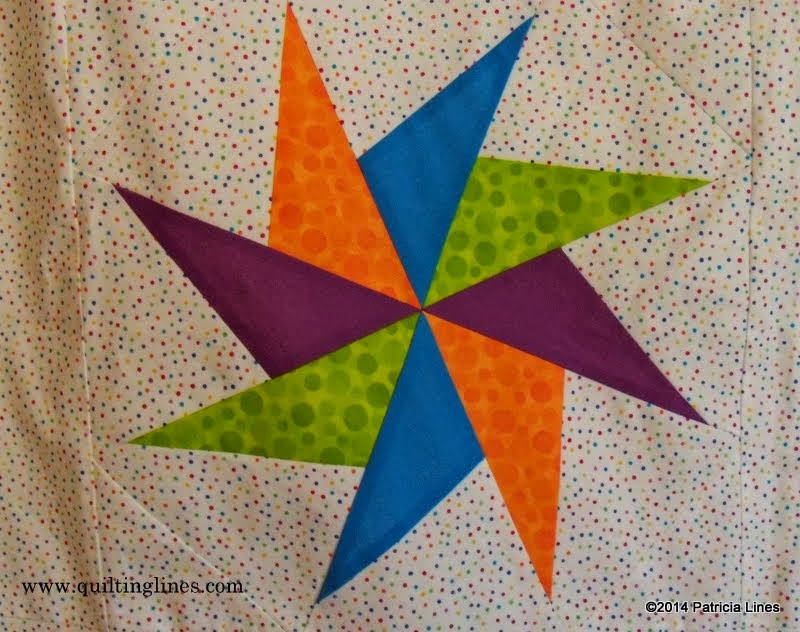 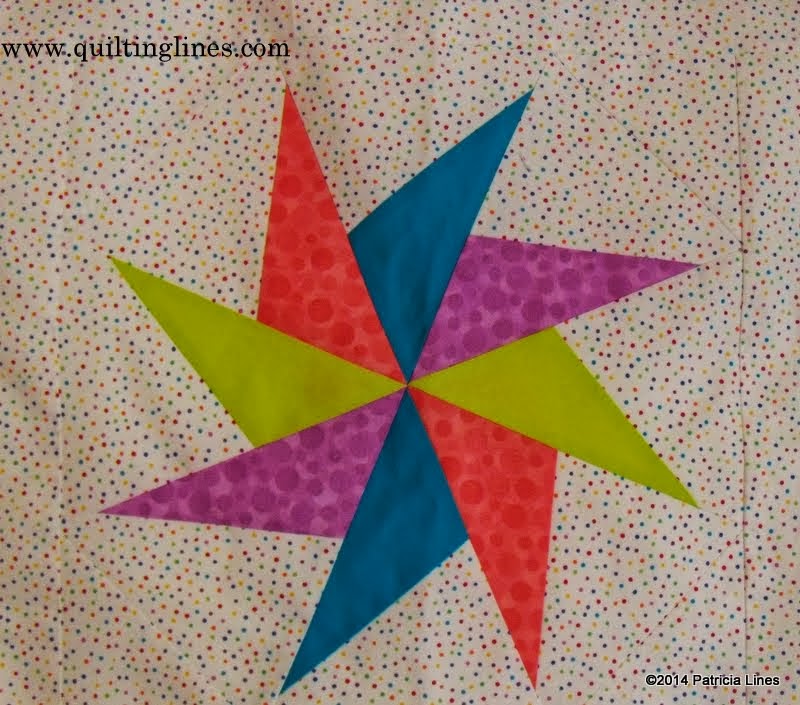 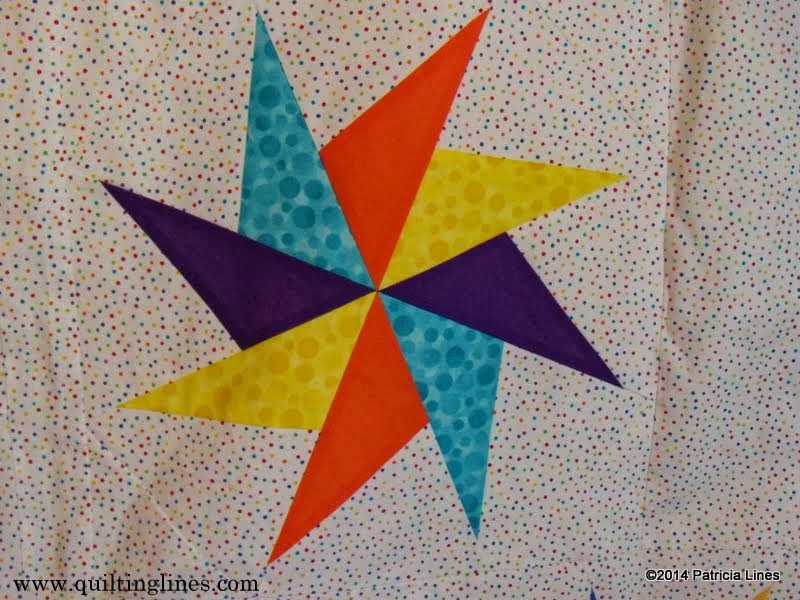 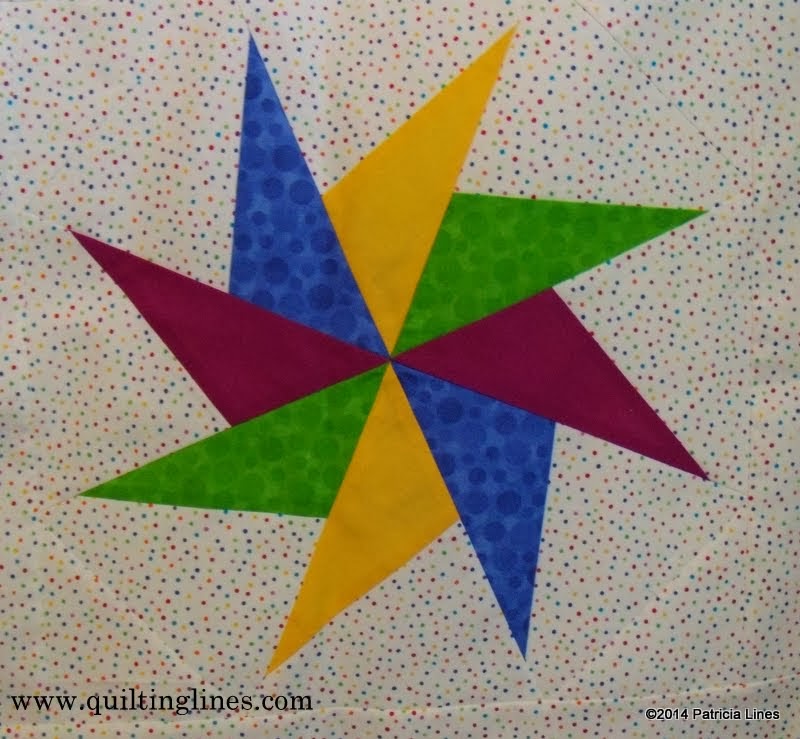 Again there are two blocks in each colorway.  I wanted the quilt to look a little different too so I went with a piano key border on this one.  Not my favorite border but I made it fit.  They can be a bit of a pain to get to the right size sometimes and don't expect the second side to fit just because the first one did.  Remember I mentioned the crooked jelly roll strips.  Grrrr.....

Here is how it turned out.  Solid cornerstones might would have looked better but then I would have had to decide which of the 8 solids to use.  To simplify matters I went with the dotted white background. 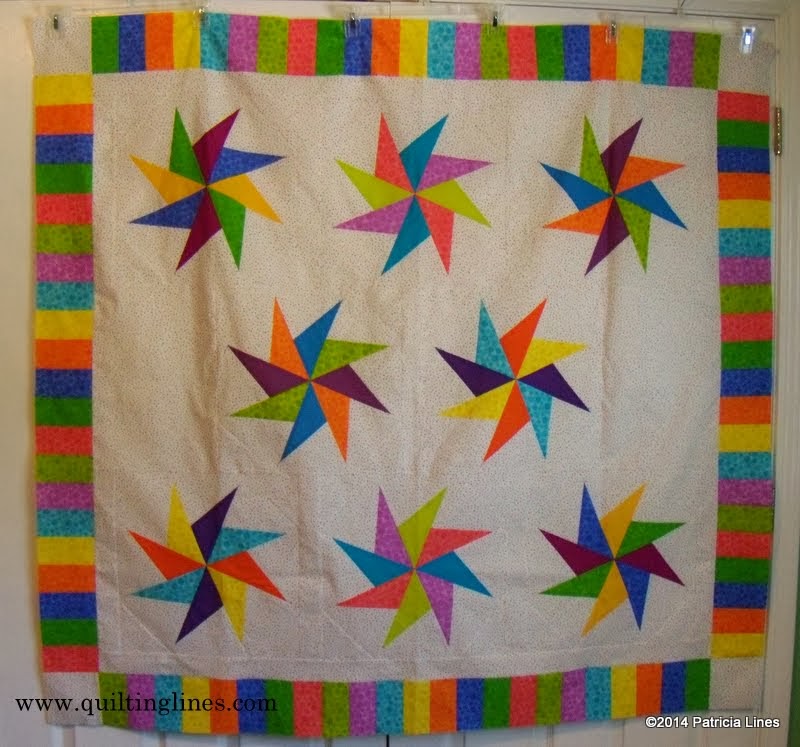 So which of the two do you like best?  Or do you think they are so similar it is a toss up?